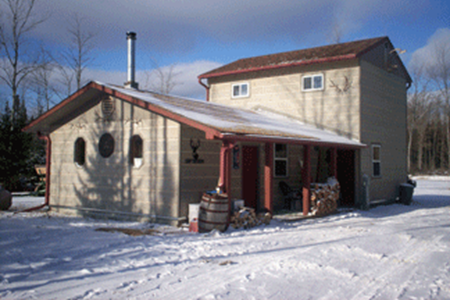 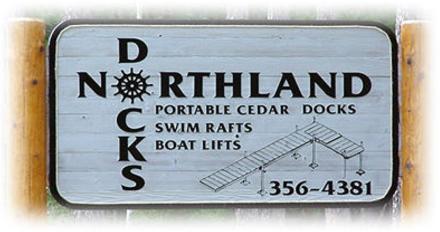 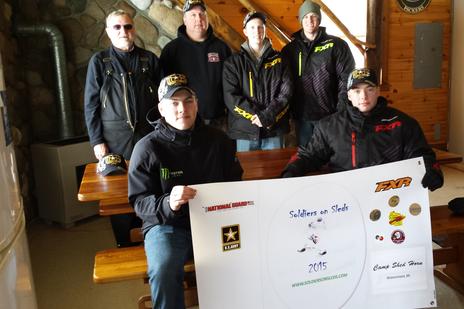 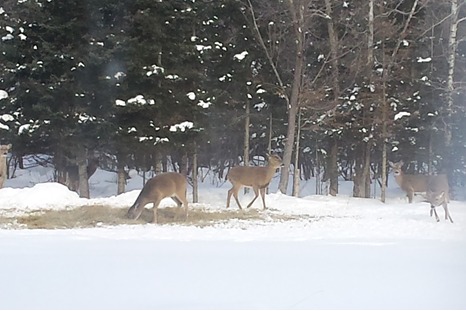 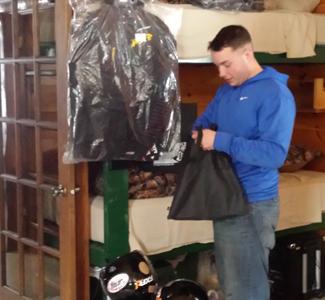 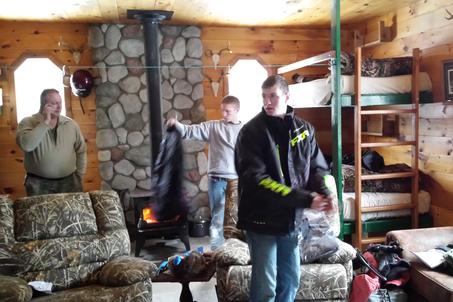 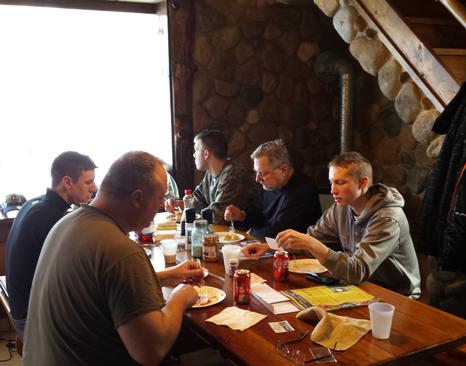 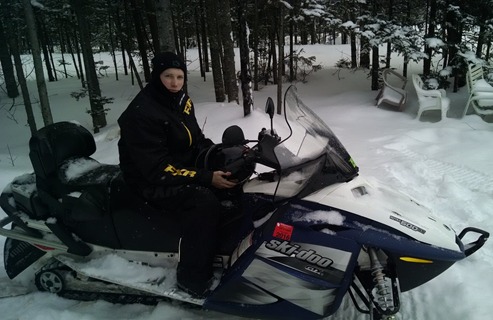 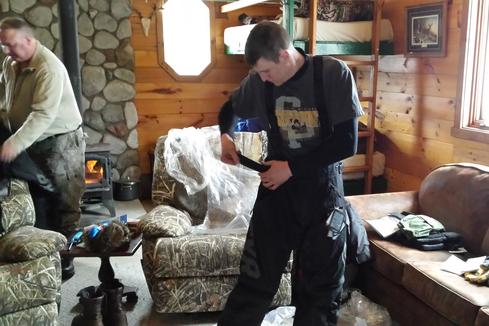 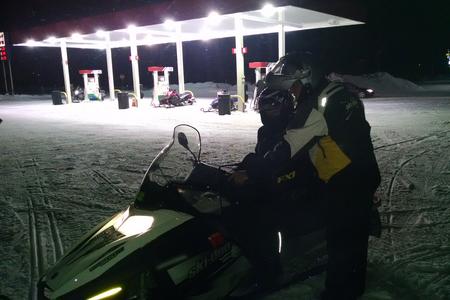 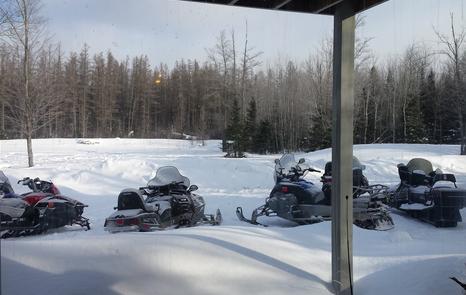 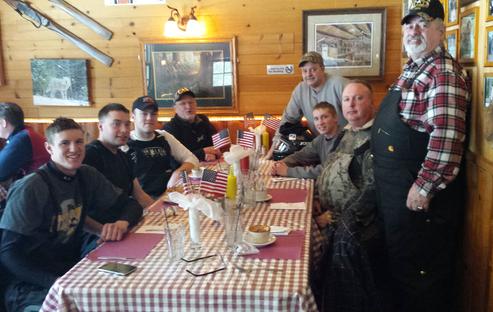 The morning was brisk, with temperatures hovering just around zero, the trailer was sitting in the yard and the aluminum sides were so cold that bare skin would crystallize to the touch. It was quite a task lining up the truck to hook up the tongue and gently lower it on the ball of the receiver hitch. But the more challenging task was yet to come......

As I pulled the trailer forward and place the loading ramp, I started the first of three snowmobiles to be loaded on for the week-end ride. It took some doing to glide the sled up the ramp and make sure it was secured, but solely I got the job done.

Leaving the driveway and heading on to the next spot to pick up sled number two from the shop. Had the carburetors cleaned and made sure everything was in tip top shape for the week-end ride. Sled number two was now loaded and time to pick up the last sled. Scotty from PBR resort was kind enough to donate this last one, and once it was loaded I'd be heading to meet up with former Army Captain Roger Klein, who was also volunteering his time and another sled, for our trip to Camp Shed Horn in Watersmeet Michigan for the week-ends festivities.

After arriving around noon we met our hosts, Neal and Renee of Northland Docks and the owners of Camp Shed Horn who were gracious enough to donate their camp for our use for the week-end.

They are the proud parents of a young lady who is presently serving in the US Army in Germany. Neal showed us around and also provided us the use of his two personal snowmobiles for the week-end. A very, very generous couple.

It was around one or two in the afternoon when we heard a knock on the door and a young man entered and identified him self as PFC Kyle Crowley from Appleton WI. He was kind of shy at first, but as soon as we loosened him up he was very comfortable in our presence. He helped us two old men unload our sleds and he could not wait to suit up in his bibs and coat and take one of them into the adjacent fields. Kyle was an experienced snowmobiler and this was quickly demonstrated as we watched from the cabin window as he surfed the virgin fresh powder in the open land.

A short while later A father and son team arrived. It was Sergent First Class Richard Helm from Medford, WI and his son Specialist (SPC) Tim Helm. SFC Helm served tours in Afghanistan's Paktika Province at a camp in Shirhana, while his son Tim is in training to be a drone operator. Both these men were novice snowmobilers and Richard had stated he had not been sledding since the 80s. They were all thrilled when we presented them brand new snowmobile suits, compliments of FXR Racing, and their representative Mr. Trevor Watson.

Last to arrive were SPC Bradley Winger from Wausau, WI and SGT Dillon Lang also from Wausau. They too were experienced sledders and brought their own sleds, which were quickly unloaded and ready for the night ride to dinner at Lac View Desert Casino for the seafood buffet. It was interesting watching all the men go through their gift bags I put together, nothing too fancy, but all donated from various local businesses, and even the local dentist, Dr. Liesen, provided the dental hygiene package for their week-end adventure. But the most exciting for them was donning their new snowmobile attire.

We spent the next hour or so chit chatting and swapping stories and getting comfortable in our surroundings and with each other. In no time at all we were on our short ride (14 miles) to the Casino for dinner. Roger made sure each rider was familiar with their sleds, and went over a few hand signals and what to look out for when riding on the trails. Then we were off, and into the woods we went. At first the speed was a bit slow, but these men quickly adapted and were were now traveling at a respectable pace. Dinner was provided through a grant from Wisconsin Public Services Foundation.

After dinner some of the men hit the tables and Sgt Dillon came back a hundred dollars richer.

We left the casino and headed to the gas station to gas up. Gas was provided through donation from benefactors through the Soldiers on Sleds www.GOFUNDME.com account. SFC Tim Klein looked smart in his new suit.

Rounding up the troops (sic) we headed back into the woods for the night ride back to the cabin. The air was clear and the sky was filled with the Northern Hemispheres various stars and constellations. A leisurely ride through the woods. A few games of pool at the cabin and they were off to bed for the night, as the next morning would be their most challenging ride.......

The next morning the men were early to rise. Coffee was on but it was interesting that these men were not like Roger and I, in that they preferred water and shunned the coffee for more healthy beverages like water and juice. But they had no trouble downing the Ham off the Bone, potatoes O'Brien, and fresh eggs I cooked up for them. They said they were not used to eating such a large breakfast in the morning. But I knew what was in store for them with today's ride and they would certainly appreciate it later......

It was time to suit up and head on out, next stop......Stillwaters Restaurant and Bar.
The experienced riding Soldiers left ahead of us, and ventured out to Lake Gogobec, on trails around the lake, while Roger, SFC Richard Helm, and SPC Tim Helm fell into sled formation and we headed south to our destination. It was about a forty or fifty mile ride. We headed south and then west, stopping off at the Bear Bar in Boulder Junction for a rest, recap and soft drink. I told the men, that we do not drink and drive on the trails, that's left for the cabin. But before I could even utter those words, they had ordered soft drinks from the waitress. From there we headed South and West for the trip to Stillwaters.

The Boulder Junction trails were a little choppy, however, it seems that Boulder Junction gets a heavy amount of snowmobile traffic. After a quick stop at the local Shell station for more fuel, we headed out. Once we hit the Sayner Barnstormer trails things got a lot more smoother and it was easy sailing. When we arrive at Stillwaters, our hosts Chuck and Karen, Chuck and old Navy man like myself, had set up a special table for us, complete with flags and great service provided by our waitress Debby. It was kind of crowded with many, many snowmobilers. Curiosity set in as to who we were and once word spread, many, many folks came up to the table and thanked these young men for their service. The food was excellent, the service was excellent and one could not ask for anything more.

After lunch it was time for our next leg of the trip.....but one of the "experienced" riders ran out of gas in the parking lot. So Chuck from Stilwaters came to the rescue and provided us with a siphon hose, where they quickly transferred gas from my sled to theirs. We put some gas in the first sled, and then the second one pulled up and we put some gas in that one too. I remarked "What am I, the Mother Ship?" to which everyone laughed. From there we headed onto Star Lake and then onto Plum Lake. Roger was quite the guide, and we ventured out from there to the Cisco Chain of lakes, were we were fortunate enough to come across a small herd of deer crossing the ice. As soon and they saw us, they high tailed it to shore and higher ground. When we crossed the last lake in the chain there were two more deer on the ice, but they just stood by and watched us as we passed. With a quick stop at Bents Camp to warm up a bit, and get some water and soda, we were off to head back to the camp for the night. We parked the sleds, entered the cabin and put another log into the wood stove in the main bunk room. The cabin was quickly heated up as the men removed their new clothing for the evening. I could tell they were beat, when we changed our dinner plans and decided to drive a short distance to Roger's Bar and Grill for sandwiches and pizza. The temperature was now dropping, -5, and then -10. The folks at the Bar were most gracious and helpful, and the food was good too, Pizza, burgers, and chilli, all what we needed to conclude the hard day of riding. When we got back to the cabin, a couple of the men took advantage of the available sauna, and soaked their weary bones in the dry heat. While out in the sauna, which was a separate building, the men could hear wolves howling off in the distance. When they returned and related the soundings, it wasn't too long before two of the younger guys could be heard on the front porch howling in the frigid cold air to see if they could get the wolves to respond. But it was late. and time to hit the hay as it was about 11:00 PM now.

The next morning, Sunday, there wasn't a peep to be heard as I arose at about seven. There was a slight snow covering the sleds, and the temperatures were at -17. Way too cold for the novice and avid sledder to venture out in.


So we spent some time looking out the window at the deer feeding on the hay that Neal had put out for them. You could tell by their winter coats they were cold and hungry.
<div class="separator" style="clear: both; te

Meanwhile I made breakfast for all, with buttermilk pan cakes and the rest of the ham. They ate hardily and decided not to venture out, as it was too cold. I told the men that the groomer had gone by numerous times during the night and prior to loading the sleds on the trailers they might want to take advantage with a quick ride, but I got no takers. So it was time to pack up, tidy up, and shut down the camp for the next party to come aboard on Wednesday, a party of twelve. This camp is an unknown secret that has now been exposed with some of the men already making plans for a trip there of their own in the future. So we took one last final photo op of the group.

Packing up:and getting ready to leave:

Let's give the Hero's a week-end of fun!